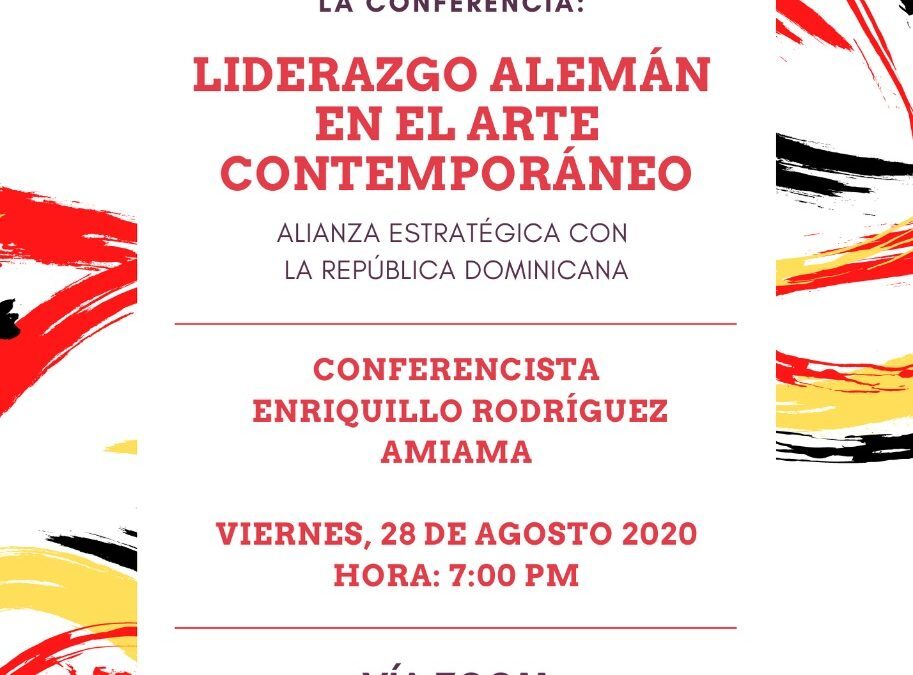 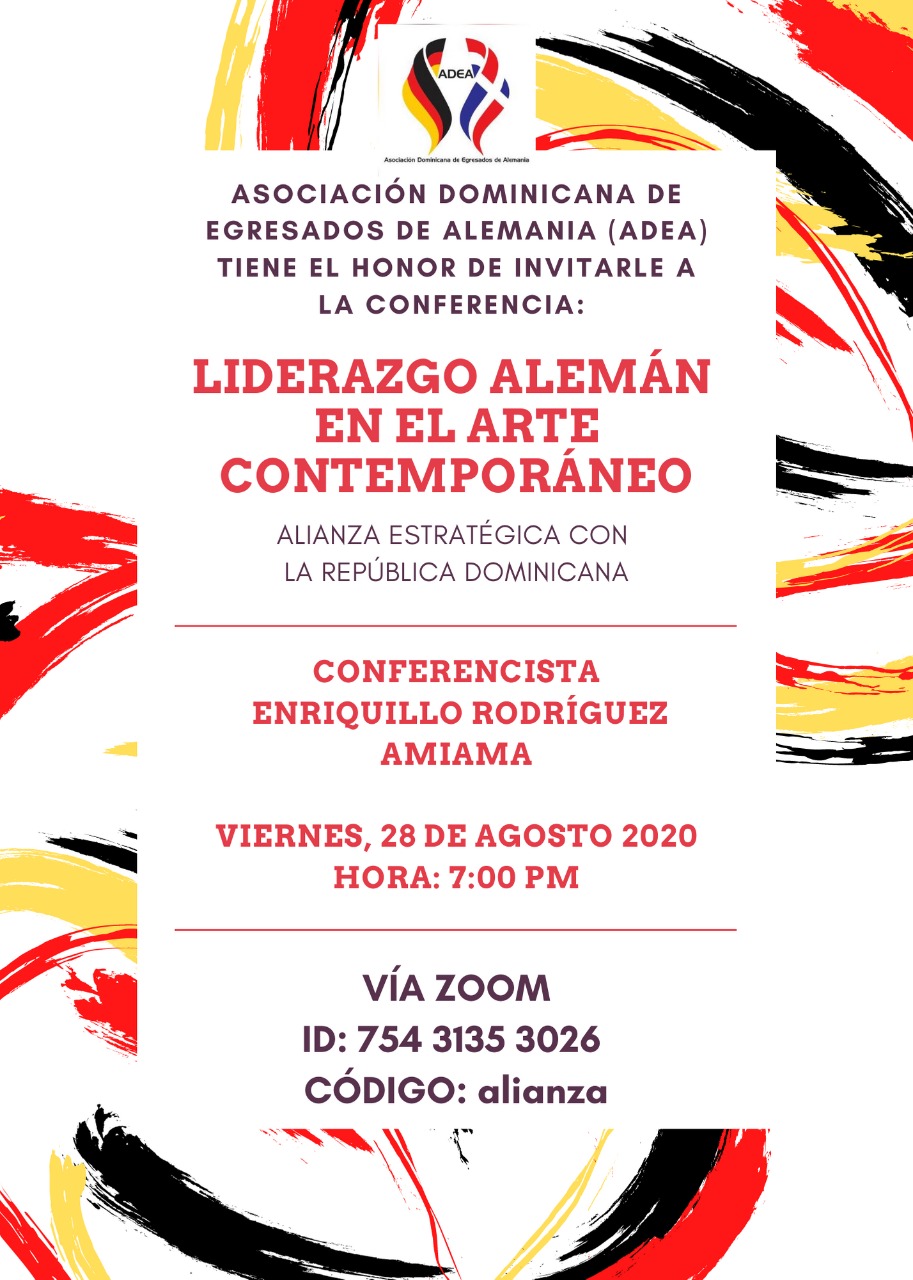 My talk about German Leadership in Contemporary Art

Thanks to the Dominican Association of German Alumni ADEA for this invitation on behalf of its president Dr. Guillermo Jiménez Solano, to the German embassy for their enthusiasm, and to all of you who accompany us.

Strategic Alliance with the Dominican Republic

A title like this can sound controversial. On what is Enriquillo based to affirm that? And why make an alliance?

If I am successful in this talk, in another that was originally going to be talking about the art I have been doing for 38 years, we would meet again and I would tell you about the existential context that directly relates me to Germany and its culture.

I support it by seeing 4 pillars:

1.- The work of its artists

2.- For the dissemination of German art

3.- The written documents that endorse and teach about the creators and their creations

4.- Because there is an active market around contemporary art

Let’s now look at these 4 fundamental elements in more detail.

1 and 2 Artists and their dissemination.

My hobby is mathematics, numbers, metrics, and geometric order. I have based my claim on specific and measurable data.

According to three books: Art of Today, Modern and Contemporary Art, and 100 Secrets of the Art World, we can extract very interesting statistical data.

One of those data is what 7 experts in contemporary art say. The seven authors offer an overview of the main artists of the then-current moment (beginning of the new millennium) Arte de Hoy.

This book, which addresses the work of 87 contemporary artists considered the main artists of the present time. With more than 300 reproductions.

Current or contemporary art refers to art from the last 20 years, which means that they are creators that continue to evolve.

Well, as I was reading, something tickled my mind. Every two or three artists a word was repeated next to the name and date of birth: Germany …

I took a pen and paper and wrote it down. Of the total of 87 artists, 20 were German, 5 women, and 18 men. I did a quick calculation and found that 25% of the top contemporary artists featured in this book are German!

In our student days, since Dr. Jiménez was one of my schoolmates, the history books brought illustrations and names of world-famous artists who were mostly Spanish (Velázquez, Goya, Zurbarán, Dalí, Picasso) Italian (Da Vinci, Michelangelo, Raphael) or French (especially the Impressionists).

But now we see that the proportion is different.

2nd The second element after the artists is diffusion. If something is not known, it is neither sought nor enjoyed.

For centuries the means par excellence of cultural diffusion has been the printed book.

Does Gutenberg sound familiar to anyone? The printing press, and hence the books as we know them today. I say books, not e-books because that’s another story.

Printed publications are the main means of dissemination of contemporary art, aided by cinema, video, and the internet with its digital media.

I cannot fail to mention, that parallel to those young people who were leading the art of the new millennium, there are other older German artists, who made much of their work in the last century, who are considered part of the History of modern art, as Ansel Kieffer, and Gerhard Richter

He became famous for his mix of social criticism and political activism. He is one of the most influential artists of the late 20th century. He draws, paintings, sculptures, performances, and installations, in addition to the practice of artistic theory.

Monumental paintings, classified as a Neo-Expressionist, he studied laws and languages. He addressed controversial issues related to German national identity.

Painter and photographer. He realist and then has devoted himself to abstraction.

3.- The written documents that endorse and teach about the creators and their creations.

By the fact that writers, theorists, or intellectuals write essays, articles, in books and magazines of world circulation.

And at the level of art criticism, they are among the experts

The third element is the writers. The images alone do not teach us as much as when they are combined with the texts written by connoisseurs

4.- Because there is an active market around contemporary art.

The fourth element is the market, which works mainly through art galleries and in recent decades also through meeting places for these through art fairs.

The pandemic has altered all this and has forced exhibitions, fairs, and auctions to turn to virtual media, thanks to digital technology

Contemporary art moves an average of billions of dollars a year

When a country collaborates with another in a consistent and disinterested way, in addition to gratitude, common sense must prevail.

Germany has provided us with its most trained technicians and experts through various non-profit organizations.

Education and culture go hand in hand, they are twin sisters.

Having a close friend is sometimes better than a distant relative. That is why I firmly believe that we must seize the opportunity, even more, the ties between the two peoples

Share experiences, teach our cultures, and encourage the study of the development of the arts and culture in general. It must be a national goal.

It is NOT necessary to create a bureaucratic entelechy, but rather to organize a joint cultural and artistic development plan that can be put into practice through existing organizations.

Of course, there must first be the consent and willingness of the political leaders, who draw up the plans and make the fundamental decisions.

Foreign relations, Culture, Education, and Tourism would be agents of development so that both countries grow more and shoulder to shoulder we work with determination, courage, and hope that we will all overcome the vicissitudes and tragedies that have struck down our peoples.

Artists, creators in general, are only generators of ideas and communications. We alone cannot transform the world and although we can influence others so that change for the better becomes a reality.

I leave these proposals to all of you so that the little spark that I light for you tonight becomes an everlasting flame that consumes the negative, the harmful, and dissipates the scum so that the gold of the noblest actions.

Let us fan the fire and God ahead let us continue towards a better future.