Story Of A Great Man 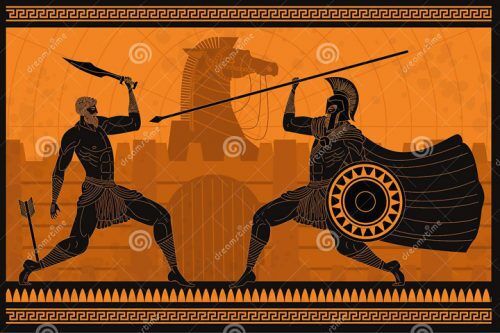 In the past, madmen identified with Napoleon. The internet has done away with clichés. Now any bad musician or writer of a good death is a significant character. Well then!

Narcissism is sauce for the kitchen of a credible story, credible?

I am a time traveler. My name is Achilles, and I am the one who killed Pantherine, the love of my life.

Homer told the story very badly. He put aside the queer aspects and other arrows that didn’t hit my heel. As Elton John sang, I’m still standing.

Centuries have passed, and my hardships have taken me here and there like a ship without a GPS. (Did you think I was going to say compass?).

The girl from Money Heist is cool. She has nothing from Tokyo, but she is hot!

Now I am an artist, and I was in the workshop of the Spaniard Ribera. His Saint Bartholomew still gives me nightmares. How natural! And scary!

From the seventeenth century to these days without feet or head, I have seen that lousy painting has become good and that “ostias“, the trade, does not count anymore. Still, they give you where they know how to provide you with so that a curator or “comisario” can put you in Arco through a gallery of those that dominate the circuit.

I’m sketching a postmodern version of the Odyssey, and the characters will be dressed up to the last cool. The faces with waterproof luminescent makeup, and a triumphal arch in the background, without covering, so they don’t tell me it’s champagne.

The winners write history, but sometimes you win the lotto and don’t tell anyone. This is my case. The networks have connected me with uncles like space travel, who again reminded me of my beloved Amazon. You realize what he has after she kills him …

Instead of living in chains, I got into the wave of the NFTs, and I have a couple of creations on a blockchain, on the authentic chain of blocks, that Christy or Cristina will auction for 2 million Euros. With that pasta, I will run away with a Russian, one of those who wink at me in Cibeles, and we will go to Punta Cana to have se* and to sunbathe until our skin turns blacker than this mother**ing government.

For the rest of the story, I will negotiate with Netflix, and a gang of gangsters, publish it first as a bestseller and give me the posse of being in the top ten of the bestsellers and going out in Hello, hello, hello. It seems that my cell phone was closed by the as*** of an agent that I have. If he tells me something, I stick my middle finger out the window; I’m fed up with so many familiar places. That’s why the Z prefer the visual archeology of emojis. Oh, if I were to be young again on the inside as I am still outside!

After they pay me, I’ll go around the Earth a couple of times, and maybe I’ll be the first non-gringo to step on the moon; I don’t care if with Elon or with Jeff, although a historical writer like me should be ok with the Amazon kisser. No?