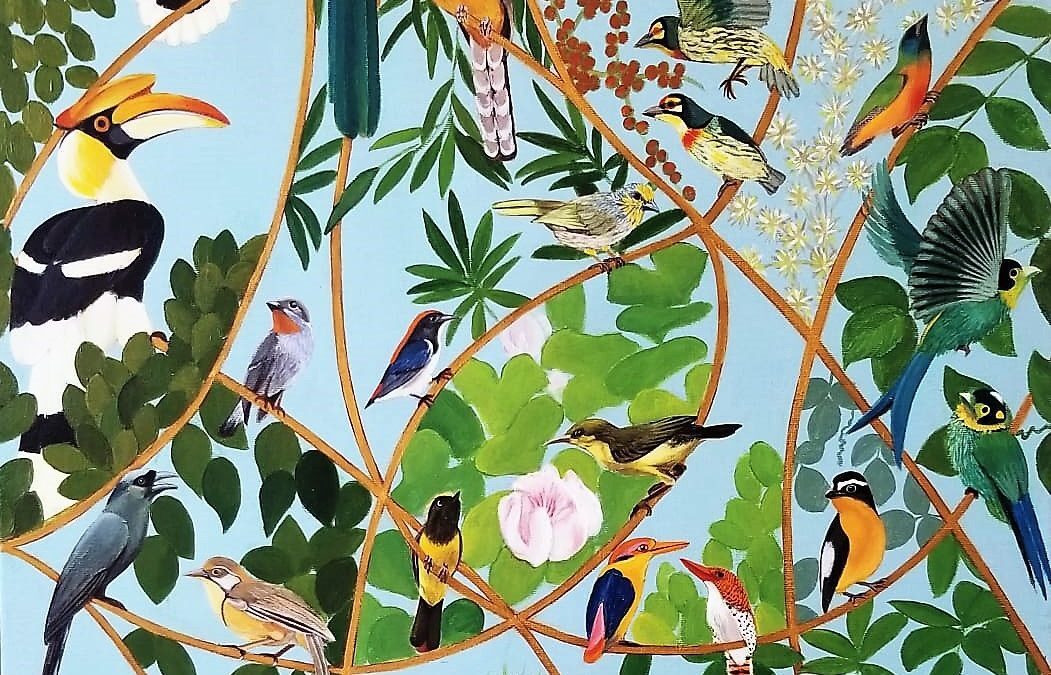 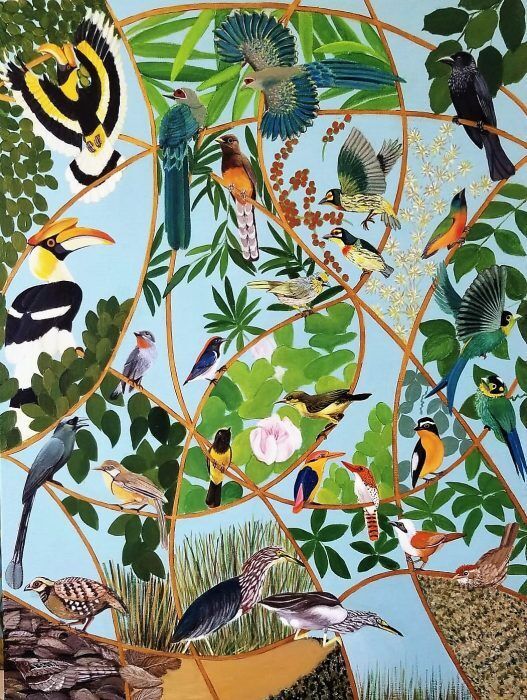 Encounters with art sometimes seem fortuitous. One goes to visit a gallery or a museum and walks through the rooms seeing works, some well-known or popular and sometimes others that we have never registered in our memory-gaze. Suddenly, something catches us …
Two of the paintings that most caught my attention when visiting the National Biennial are a couple of landscapes by Patricia Tolentino. The first reason for my surprise was that I did not know that in addition to architecture, she painted. The second, that I liked them a lot. A realism of defined contour, with a naive touch that reminded me of Henri Rousseau, made me stop to contemplate them carefully.
Just a week ago I had the good fortune to visit another place where I have enjoyed the art experience on many occasions: The Arte Berri gallery, in the colonial zone.
There is currently exhibited a set of 40 works by Patricia Mano Tolentino.

Sister of the award-winning painter Inés Tolentino and daughter of critic Marianne de Tolentino, it really shouldn’t surprise me that Patricia painted. She was born and raised in a home where art and culture, hand in hand with her father, Don Mario, and her mother, Doña Marianne, was the daily bread.
What has really excited me is that he does it very well. Of course, I was clueless, because Patricia had already done other exhibitions, in Tel Aviv, where she resides, in Venice, Santo Domingo, and Sosua. Landscapes, portraits, and other subjects have been part of her production. I read in the catalog that since 2014 she has dedicated herself to painting.

At first glance, the exhibition reveals an ecological, conservationist concern. Patricia “portrays” animals that we see in magazines, documentaries, and internet sites. They are not part of the everyday fauna like kittens, dogs, etc. They are species in danger of extinction, some at imminent risk.
Conceptually, this gives the show a cohesive element of social, human value. The balance and harmony of living beings on the planet depend on the existence of all forms of life on it. When this breaks, we are all dying.

In Patricia’s pictorial clamor there is a call to action. She expresses:
“It is time to fight against indifference and indolence in the face of the disappearance of the animal kingdom, in the era of “homo sapiens”. Our so-called progress was imposed through geographical settlements, but man settled against that kingdom and not alongside it … it has led to the fact that most species, today in the 21st century, are threatened in their existence.
… We cannot ignore the deterioration of the environment, to which the human being relatively accustomed, but the fauna cannot adapt or resist, suffering horribly the consequences of those changes. Before the animals, big and small, companions of our life, disappear, this exhibition wants to be a manifesto, against oblivion, abuse, and darkness. The works on display are intended to contribute to awareness, more than timely, necessary to avoid falling into an abyss, which would be the announced disappearance of that part of life. ”

I think her words are clear and eloquent, that is, they have sufficient expressive force and help us understand the reason for the above, the first exhibition that we see dedicated especially to raising a serious and current ecological crisis.
However, seeing the discreet size of the works, their general composition, I can affirm that Tolentino creates his speech with subtlety. There is a certain intimacy and modesty that reveal a sensitive soul that does not seek sensationalism or take advantage of a subject to show off. No, his concerns are genuine and deeply serious.

The techniques are divided between oil and acrylic, at the discretion of the artist, taking advantage of the advantages and characteristics of each. From birds of Israel, through animals of the Arctic, to hutias of Hispaniola, there is a universe, a world in danger represented in paintings all finished in this year 2021.
Postmodernism is like a diamond; it has many facets. This is reflected in the paintings we are analyzing. There are two poles, a series of works that could be considered as realistic, documentary, objective paintings. In these, the compositions are already defined by the photographs that served as models for the paintings. The treatment is academic, in a work sequence that begins with a fairly faithful drawing, proportionate, with spaces or natural backgrounds specific to the context of each mammal or bird.

Another line is more subjective and creative. The concept of denunciation remains, but the artist lets her creative self “fly”. It combines the meticulous work of animal realism, with a more unreal landscape, perhaps naive, of two-dimensional flora – flat like Egyptian art – and compositions in which species of different places are intermixed to the beat of a happy rhythm. This leads the eye to take a visual tour of scrolls and lilting curves. This is the series that I enjoyed the most. It is not necessary to show the raw and ugly to shock us. You can also scream through the beautiful!

I invite you to visit this remarkable and intimate collection of paintings, acquire them and thus spread the message through their family and work environments and help answer the question that Patricia Tolentino asks us: “Until when?” find answers. Our destiny demands them.